Want to participate in the testing of the first Tesla Roadster iPhone App? 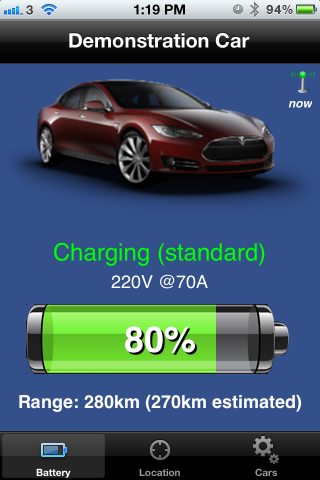 The OVMS iPhone App has been largely completed, and has now entered testing phase. Even if you don't have the car hardware yet (as most don't), you can still get the App and try it with the DEMO car provided.

At the moment, the App is fairly minimal. It lets you see the battery and charging status, the car's location, and works with as many cars as you have access to. It supports push notifications (both in the App as well as outside using Apple's Notification Centre).

If you would like to participate in the testing of this App, make sure you meet the minimum requirements (primarily an Apple device running iOS v5), then follow the above link to sign up for testflight. It is free.

There are currently 0 users online.

The OVMS (Open Vehicle Monitoring System) team is a group of enthusiasts who are developing a means to remotely communicate with our cars, and are having fun while doing it.
Web: www.openvehicles.com
Code: www.github.com/openvehicles